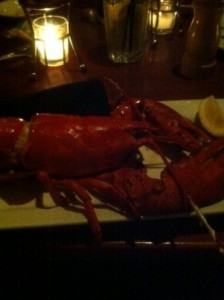 Every once in a while it’s important to indulge in some high-calorie fare. A few co-workers and I decided that it was time to have some lobsters, so we headed to Mitchell’s Fish Market at the Waterfront. I was excited because it had been years since I had had delicious lobster.

We sat at a table neat the window, and began to look over the menu. We started with a few Caesar salads (extra anchovies on the side please!), voodoo shrimp, and crab, artichoke and spinach dip. Our salads arrived first. The romaine was crisp and sweet, with just enough dressing on the leaves. I counted two croutons on my salad (seriously?), and there was a small bullet with my furry anchovies. The salads were topped with parmesan cheese, which added some much needed salt. Overall, the salads were a great start.

We decided on spinach, crab and artichoke dip, as well as voodoo shrimp as our appetizers.

15 minutes after ordering, our starters arrived. I dug into the spinach-crab dip first. The mixture was creamy, rich, and full of lump crab meat, and tasty chunks of artichoke hearts. The gooey appetizer was topped with plump, olive oil soaked sun-dried tomatoes; one of my all-time favorite foods. The dip was served in a ceramic crock with a plate, and thin corn style chips for dipping. I really loved the flavor, but the dip was barely room-temperature; a little more heat and the dish would have been a home run.

The voodoo shrimp were next. They prawns were plump, and cooked perfectly. The voodoo-barbecue sauce was much more spicy than anticipated (mas agua por favor!), and was almost too hot for one of our party to eat. The white rice was a nice accompaniment, and an effective tool for cutting some of the spice.

“May I clear your dishes please?”

As we waited for our entrees, I slowly began to calculate how many calories I had ingested thus far. Wait, probably not a good idea; I can do that after I’m done eating.

Before our lobsters arrived, a server approached our table with three sets of mini-sternos; small metal containers designed to keep our drawn butter warm. Perfect. As I watched my butter bubble, all I could do was picture it coursing through my veins… maybe I’ll stop for an angioplasty on the way home.

Our lobsters were placed in front of us, and we quickly cracked away. As I tore the claws off Larry (someone at the table had already named my lobster) I could smell the sweet salty scent of the ocean; it brought back fond memories. I speared a thick chunk of claw meat, and immersed it in the hot butter. The tender meat was flavorful and soft… more please! Everyone at our table was fully engrossed in their meals; it had been a while since they had enjoyed fresh crustaceans as well.

Loaded baked potatoes and grilled asparagus were served with our meals. Plenty of butter and sour cream slathered our spuds; yum.
Only shells remained on our table- a feast fit for kings was had, and we did an excellent job of completing the task at hand. Our stomachs were full, and we were happily satiated.

Of course we would!

Crème brulee, chocolate cake, 7-layer carrot cake, and shark-fin pie, were among some of the choices.

Since we were all ice cream fans, we decided to try the shark-fin pie.

“This is a big dessert,” our server warned us, “It’s meant to be shared…”

This colossal dessert surprised us all. It was at least eight inches tall, (no exaggeration) and beautifully presented. Layers of ice cream, peanut butter, roasted peanuts, peanut butter, ice cream and fresh whipped cream adorned the plate. We quickly grabbed our spoons from server’s hand, and dug in. The ice cream was thick and delicious. Large ribbons of frozen peanut butter were layered throughout the pie, and we quickly excavated them like miners digging for precious gold.