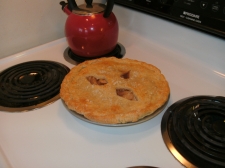 A few years ago, I fell in love with a TV show called Pushing Daisies. It was about a man called Ned, a girl called Chuck, and PIES! And death. But for now, I am concentrating on the pies. Ned is a piemaker, and during the course of the show makes many delicious sounding desserts. The one that stuck with me was a Pear Pie with Gruyere cheese baked into the crust. Intriguing, no?

Recently, I decided to try this pie on my own. I went to the Strip District to load up on fresh ingredients. I had never been “shopping in the Strip” before, as Pittsburghers love to do. It was a real treat to go down there with a list and make my way through the busy sidewalks to find what I needed. I love when Pittsburgh doesn’t feel like Pittsburgh.

I found this recipe at one of my favorite food blogs, Blondie and Brownie.

In a large mixing bowl, I combined the flour, salt, and sugar. I purchased a half a pound of Gruyere cheese from PennMac yesterday (by the way, how cool is that place?!). I grated the Gruyere with a fine Microplane grater until there was a little less than half the wedge left. I cut the butter in myself, since I don’t have a food processor. Then I added the water a tablespoon at a time. The recipe mentions something funny about using a squirt bottle to get it to just the right consistency, and believe it or not, it actually works! I kneaded (Ned?) the dough into two balls, one slightly larger than the other. Ideally, the dough should be chilled over night, but since I was in a hurry (or rather, I’m just terribly impatient), I put the dough in the freezer for about forty minutes to chill. I began working on the poaching liquid for my pear filling.

I brought port wine, sugar, nutmeg, ginger, clove, vanilla, cinnamon stick, and some water to a boil. Then I added my thinly sliced sweet pears. It smells sooo good in here right now!
I removed the pears and set them aside in a chilled bowl. I reduced the poaching liquid to ¾ cups and added a little cornstarch to create a spicy syrup. I rolled out my two pie crusts, and cut a few pretty holes in the top to allow steam to escape. Eventually I’d like to be able to make lattice crusts or even fancier leaf patterns for the top crust. For now, I’ll settle with a basic crust with an egg wash. I spooned the spicy pears into the bottom pie crust, and carefully folded my top crust onto the pie. I used my nimble sausage fingers to seal the pie around the edges.

I baked the pie at 350* for 30 minutes, then 5 more minutes, then three more minutes. I grated a little bit of the Gruyere onto the top of the pie, and it looks nice on the golden brown crust. It looks and smells terrific!

I shared slices of my hot Pear Pie with Ryan and Brianna, and they seemed to agree that it was great! I loved it (if I do say so myself). The next day, I took the remaining slices in to work to share with Mari and Chef Chuck. Success! Two more enthusiastic positive reviews of my pie! It was a lot of work, but I felt a sense of accomplishment when my friends enjoyed my dessert. I would encourage any pear lovers out there to try this unique and delicious pie! 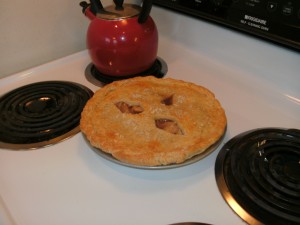