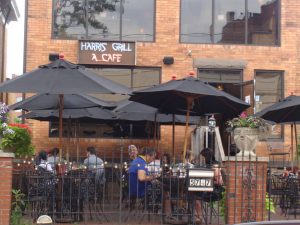 When I thought of Harris Grill, I’d think of a bunch of hipsters sprawled out on the patio with clove cigarettes and PBR, talking about their new garage band or their sister’s new girlfriend.   I suppose that is largely still true, though it’s not nearly as off-putting in real life as it is in my annoyed imagination.  Harris Grill lives on Ellsworth Avenue, a notoriously “trendy” section of Shadyside.  Usually when I employ that word, trendy, I mean it in a bad way…trendy haircut…trendy leg-warmers…trendy Vampire Weekend album.  At any given moment, you could probably find all three of those things at Harris Grill, but the restaurant itself is not “trendy.”  Its style is refreshingly original, sultry even.  From the smart-assed menu to the creepy paintings of clergy-folk on the restroom doors, Harris Grill has injected so much weirdness into the atmosphere, it’s impossible for me to not love it.

And love it, I do.  I’ve had many great times at the Harris, and when it was out of commission for while after a Pompeii-style fire evacuation, I missed it dearly (ok, maybe that’s an exaggeration).  It’s been my birthday celebration host for a few years now (Harris Grill is the new McDonald’s ballpit) and at the recommendation of the aforementioned menu, I’ve been known to take advantage of their weekend brunch Prix Fixe menu to shake off a hangover or a bad date.  One of my all-time favorite memories of this city is the day my buddy Sam & I sat on the patio and drank 37 whiskey & lemonades.  (Man, I love drinking outside with friends.  Harris Grill is PERFECT for that; if only Pittsburgh had more than fifteen minutes of sunlight a year).  Anyway, I thought I had the place figured out…Harris Grill is a good time for a crazy little lush like me.  It wasn’t until I went there for dinner, with a real official date, that I realized just how perfectly the food and service complement the fun atmosphere and drink menu.

Ryan and I walked over to the Harris Grill for dinner on an especially creepy & crispy fall night.  Of course the patio was packed, so we took a table for two upstairs.  It is surprisingly sexy on that second floor; the walls are dark, but there neat light fixtures all over the place…you can see your food and your date, but you aren’t distracted by the knuckleheads surrounding you; it’s intimate and nice without being cheesy.  Luckily that is not the case with the Buffalo Chicken dip appetizer, which was very cheesy and also sexy.  Served with warm pita and topped with crumbled bleu cheese, this concoction would make any chicken proud.  For dinner, I enjoyed a fresh (fresh! fresh!) Greek Salad, complete with grilled chicken, pitted Kalamata olives and feta cheese (hmm…didn’t realize how much I love cheese…).  Ryan practically ranted about how good his Henny Penny was…blackened chicken sandwich with lettuce, tomato, red onion, and spicy mayo on texas toast.  Oh, and I had a really killer draft beer, too;  Anderson Valley Winter Solstice.  Jamie, our waitress, was friendly and attentive throughout the meal.  She told us before we looked at the menu what the restaurant was out of that night, but then she also made recommendations for other awesome dishes.  (Thanks, Jamie!)  The whole thing came in at just under $50.00, and that’s including the bar drinks- pretty good.

The only complaint I have about the place is that it’s always crowded.  Then again, even the out-of-the-way tables are not excluded from the interesting atmosphere & great service.   (Oh!  The second floor of the Harris has large booths facing huge floor to ceiling windows…if you ever want to take a handful of hungry people to dinner, it’s perfect for people-watching.)

Obviously, I really dig this place.  I’ll probably write about it more than once, just so you can get an idea of whether it is consistently awesome (or not).  I find that it’s got different vibes at different times of year (mainly due to space because the patio is closed on snowy winter days).  In the meantime, I’d encourage you to check it out for yourselves…just don’t park in the lot next to the restaurant; watching tow trucks haul cars out of there is more fun than a Pirates game.

And I almost forgot:  Tuesday is Bacon Night! 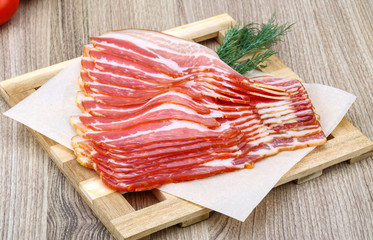